The conservancy is a watershed, where a combination of freshwater streams, rivulets, and rivers form estuaries, which all drain into Milton Harbor, mix with the saltwater from Long Island Sound. This is the largest remaining salt marsh of its kind in Westchester County. It is a vital, essential, and unique habitat and resource for many plants and animals that have adapted to live only here and nowhere else. Other salt marshes have all too often been filled in for parking lots and housing and office developments.

Spartina, the Dominant Plant of the Salt Marsh, Has Adapted to Living in Saltwater

Spartina (formerly Spartina patens, now re-classified as Sporobolus alterniflorus), is a low marsh cordgrass, which has adapted to the harsh environments of high salt concentrations, consistently damp or water-covered soil and low oxygen levels. Frequently inundated by the tide, spartina is a highly specialized plant, adapted to grow in salt water. It is able to secrete salts that accumulate in it, through special glands in its leaves. Although its roots are embedded in thick mud which contains no oxygen, it is able to obtain oxygen through hollow tubes that reach all the way down from its leaves to its roots. It is native to the coasts of the Atlantic Ocean and forms dense colonies. Spartina (Sporobolus alterniflorus) has been planted by humans to reclaim estuarine areas for farming, to supply fodder for livestock, and to prevent erosion. These grasses provide rich habitat for crustaceans, mollusks, and birds, and serve as a major source of organic nutrients for the entire estuary. Mats of this salt hay grass are inhabited by many small animals and are an important food source for ducks and seaside sparrows. Spartina marshes serve as pollution filters and buffers against flooding and shoreline erosion. 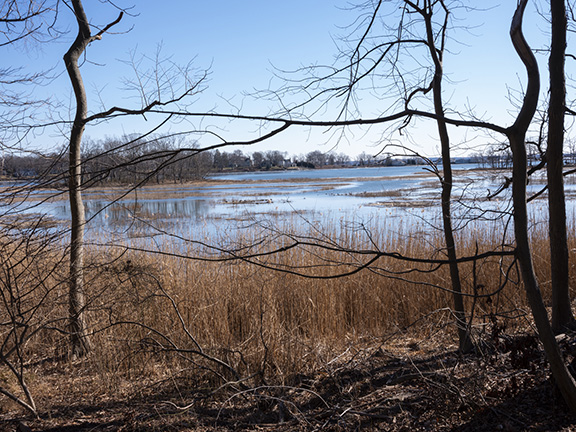 The salt marsh at high tide in winter — Rory Mulligan©

Spartina, Constantly Cut by the Force of Tides and Storms, Accumulates Layer Upon Layer of Spongy Decomposing Grass 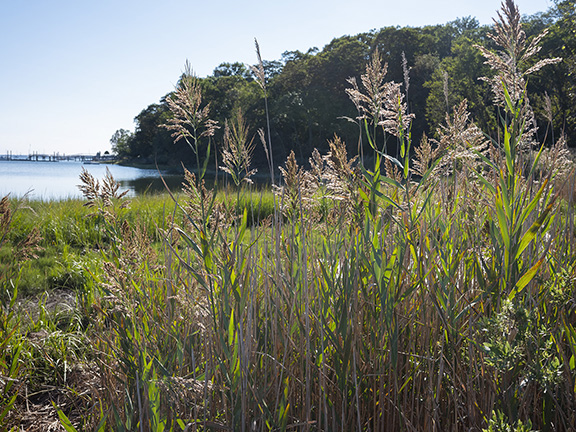 The tall reed phragmites (Phragmites Australis), grows in the foreground, closer to the land in mostly fresh water. The low growing spartina (Sporobolus alterniflorus) in the background grows in the salty seawater — ©Rory Mulligan

Spartina, a perennial deciduous grass, is cut by the force of incoming tides, wind, and rain. Its roots are continuously growing horizontal underground stems, which put out lateral shoots and roots at intervals, building up an ever more dense mat of organic material. Accumulating, year after year, layer upon layer, this fibrous organic matter, creates deep spongy beds filled with water. In the spartina beds live scud (Amphipoda), tiny crustaceans that live in the salt marsh and that number in the millions. They are detrivores, which contribute to decomposition and the nutrient cycles of the salt marsh. A salt marsh is one of the most productive ecosystems on earth. The tides constantly mix the waters. Harmful accumulations of waste products are diluted and removed. Nutrients are brought in constantly from sea and land. As a result, a salt marsh produces nearly ten tons of organic matter per acre every year. In comparison, the best hay only produces about four tons per acre. A salt marsh is an ever-growing organic buffer against storm surges and rising sea levels.

Wedged Between the Spartina and the Land, is a Common Reed, Phragmites

Plants grow in different tidal zones depending on their salt tolerance. Seacoast marsh elder (Iva imbricata) and groundsel bush (Baccharis halimifolia) are shrubs that grow in the intermediate zone. The common reed grass phragmites (Phragmites Australis) grows around the edges of the marsh. Introduced from Europe about 300 years ago, it out-competes native vegetation, like the perennial marsh reed, the Broadleaf Cattail (Typha latifolia) and lessens the local plant diversity.1 Like the native cattail (Typha latifolia), phragmites prefers growing in fresh water, but does tolerate small amounts of saltwater. Despite being an invasive species, the tall dense reeds and roots of phragmites does provide good nesting and roosting habitats for many different species, including seabirds. It has also been found highly beneficial in reducing coastal erosion.

The very tough environment of the salt marsh, varying in the extremes, with high and low tides twice a day, limits the number of creatures and organisms that can adapt. Atlantic marsh fiddler crabs (Minuca pugnax) avoid being swept out to sea every high tide by digging holes to hide in and covering the openings with mud. They trap enough oxygen inside their holes to breathe underground, while the high tide engulfs the land above them. They emerge only as the tide goes out to sea, when they can safely forage in the sand. A variety of other crabs, snails, and worms find a home here. It is an important breeding ground for saltwater fish. With plenty to eat, fish lay their eggs here, and their fry are sheltered from the oceans, in the narrow channels between the mounds of spartina. During the warmer months, the mudflats provide an excellent foraging habitat for egrets and numerous species of herons, sandpipers, and plovers. Ducks and geese paddle through the channels year-round. Land animals, like raccoons (Procyon lotor), visit the salt marsh to feast on blue mussels, crab, shrimp, and fish. 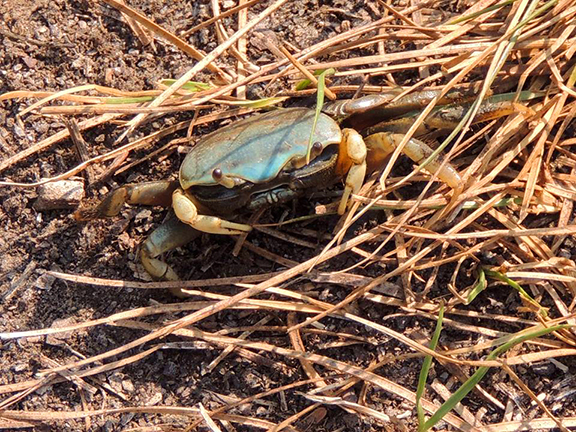 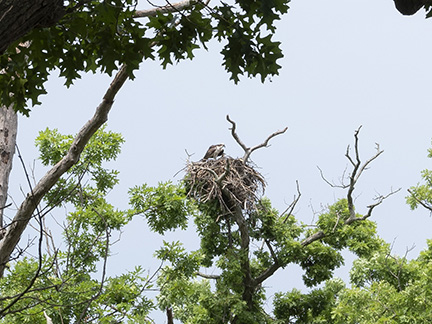 Osprey are a single species found worldwide, but within that group there are four subspecies, one of which is the North American osprey (Pandion haliaetus carolinensis). Every spring, these osprey return to their treetop nests above the salt marsh. Each time they return, they rebuild their nests with a new pile of sturdy sticks, skillfully placed above the sticks laid the previous year. A nest is improved every year and grows taller for each new successive brood. You can see the osprey fly fast and low across the harbor, raising their great wings above the sea, as they reach out their talons, skimming over the water to grab fish out of the sea. They then rise up high above the water, circling with a fish, head aligned forward in their talons, before returning to the nest to feed their fledglings. 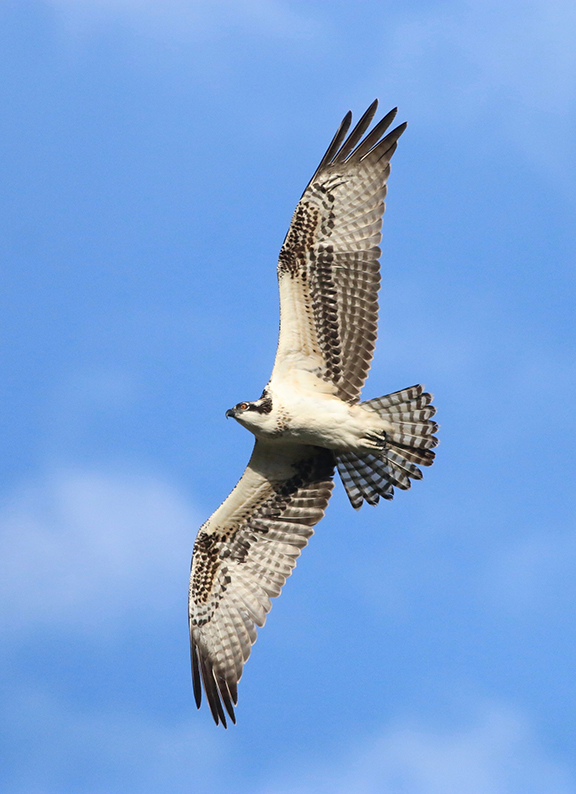 Soaring high above the salt marsh, the North American osprey (Pandion haliaetus carolinensis) has a wingspan of about five feet — ©Christina Baal

1 Research by entomologist Douglas Tallamy found that the non-native species Phragmites australis, even after 300 years of growing in the US, is food for only five species. Whereas, in its native habitat in Europe, it has coevolved with specific creatures over the millennia to feed over 170 species. Douglas Tallamy, “Do Alien Plants Reduce Insect Biomass?” Conservation Biology 18 no.4 (2004), doi: 10.1111/j.1523-1739.2004.00512.x.

Adapted in part from John and Mildred Teal, Life and Death of the Salt Marsh. New York : Ballantine Books, 1983.