Most of the walking trails at the conservancy wind through this woodland area, allowing visitors to see several different stages of forest succession. The American sweetgum (Liquidambar styracifluar) grove, a relatively young forested area, is one of the most northern naturally occurring stands of these typically southern trees in the country. In the southeast part of the conservancy a significant portion of the old growth forest remains, consisting primarily of oak and hickory. However, the rest is predominately second-growth forest, full of red (Quercus rubra), white (Quercus alba) and chestnut oak (Quercus montana), which often hybridize in the wild. There are also native wild black cherry (Prunus serotina), tulip trees (Liriodendron tulipifera), North American beech (Fagus grandifolia), and others.

The trees in the forest grow closely together, with most branches at the top to catch the vital rays of sunlight. A large size, with a wide trunk that has branches on all sides all the way up the tree, indicates that tree that grew up in open fields. Until several hundred years ago sunlight surrounded a few remaining trees on all sides, after most of the old trees were cut and cleared. The land was then plowed and turned into fields for growing crops or raising animals. (See History). 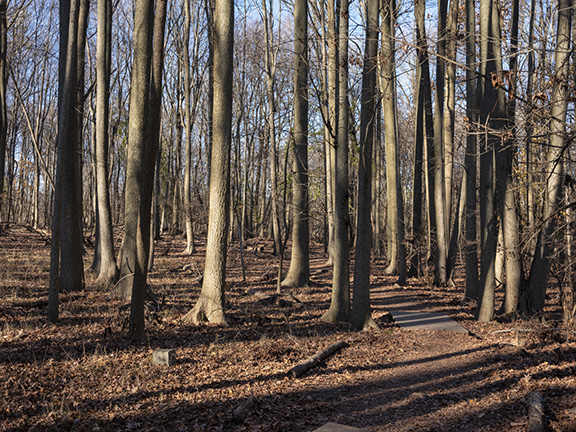 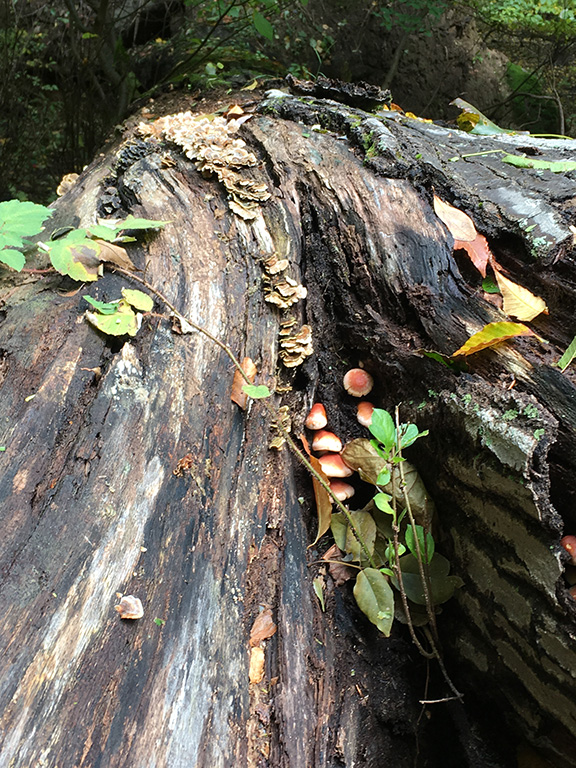 These trees, like all green plants, make their own food through photosynthesis. In the presence of sunlight, green leaves synthesize carbon dioxide absorbed through pores (stomata), mixing it with water drawn up to the leaves from the roots. During daylight hours, when photosynthesis occurs, plants make more oxygen than they use. This oxygen is released through the stomata on the underside of the leaf. The process of photosynthesis is largely responsible for producing and maintaining the oxygen content of the Earth’s atmosphere, which supplies most of the energy necessary for life on Earth.

Many different creatures make their homes in this forest.

The familiar eastern gray squirrel (Sciurus carolinensis) lives in the trees; foraging during the day, on the ground and in the trees for buds, nuts and sometimes fungi. Their relative the chipmunk (Tamias striatus) or ground squirrel, live in hollow logs, in amongst stones, and in networks of underground tunnels. The very familiar, mostly nocturnal omnivore, the raccoon (Procyon lotor) also lives in the woods, under rocks and in hollow logs as well as resting high up in trees. Its distinctive, extremely dexterous front paws, facial mask, and ringed tail, are featured in the mythologies of the indigenous peoples of the Americas. Its name is a corruption of North American Indian and part French languages. (See History).

Unlike the other amphibians which visit Parson’s Pond, the northern redback salamander (Plethodon cinereus) remains in the forest. Here they eat a wide variety of small invertebrates, including spiders, worms, snails, larvae and insects. This secretive nighttime forager breeds in the fall and lays egg in the spring. The eggs are laid on moist, terrestrial areas, under logs, stones, or moss along the edges of wetland pools and ponds. 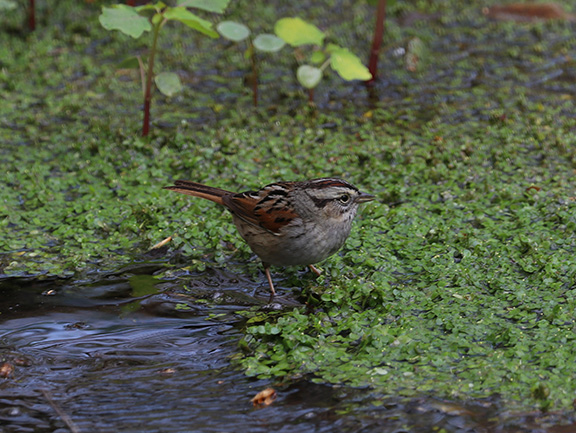 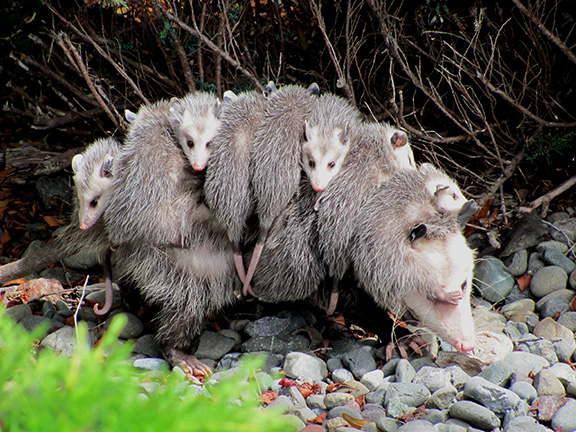 In Amongst The Forest Creatures, Lives America’s Only Marsupial, The Opossum

But among the most unique mammals in the forest is the solitary, nocturnal Virginia opossum (Didelphis virginiana). The word “opossum” is taken from the Powhatan language. (See History). Like its Australian relative the kangaroo, opossums are marsupials. Females usually have about 13 babies but can have as many as 20. Babies are about the size of a dime when born, and have to climb up their mothers fur to reach the safety of her pouch. Inside, they latch themselves to a nutrient-rich teat. After two months, they climb out and up onto her back, and from that vantage point they learn survival skills. At about four to five months they are on their own. They live in abandoned burrows and hollow logs and are adept tree climbers. They are omnivores. In response to a threat from a predator, they imitate the appearance and smell of a sick or dead animal. “Playing possum” is an involuntary response. Sometime later they will “wake up” and walk away. 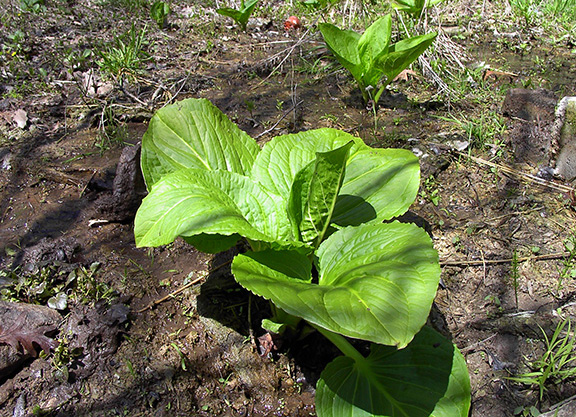 The Eastern Skunk Cabbage, a Plant That Creates Its Own Heat

An extraordinary plant grows in the damper, swampier, shadier part of the forest. In early spring, the mottled purple dark green cover (spathe) cloaking the purple flower stalk (spadix) of the eastern skunk cabbage (Symplocarpus foetidus), appears above the earth. The eastern skunk cabbage grows through the snow and ice, literally melting the snow around it. One of the very few plants in the world that creates its own heat (60- or 70-degrees Fahrenheit), it does so by breaking down starch stored in its roots underground in a process called thermogenisis. The heat helps spread the odor that gives the eastern skunk cabbage (Symplocarpus foetidus) its name.

Its smell attracts early pollinators, such as gnats (dipterid), carrion flies (Calliphoridae), and flesh flies (Sarcophagidae), which pollinate the flowers, along with opportunistic spiders (Araneae) looking for a meal. After being pollinated, the flowers produce purple or black fruit (about four inches tall and one-third inches wide), which ripen after the plant has gone dormant. It is an ephemeral plant, as its foliage dies by the end of June. The large central root of the plant contracts yearly to pull the plant deeper into the ground. In spring, the familiar, large bright green leaves of the skunk cabbage are food for snails (a terrestrial pulmonate gastropod mollusk), slugs (a shell-less terrestrial gastropod mollusk), ruby tiger moths (Phragmatobia fuliginosa rubricosa) and cattail borer moths (Bellura obliqua). The leaves are toxic to most animals. However, North American tribes, knowing how to avoid the toxicity of the plant, used parts of it to treat conditions ranging from headaches and earaches to external bleeding and mouth sores. (See History).