An Expanse Defined by Native Grasses and Wildflowers

This meadow is the oldest known continuously-managed meadow in New York State, an open area of 16 acres, exposed to warm, bright, direct sunlight from every direction. It is defined by tall grasses, wildflowers, and a few small trees and bushes. From the trail along the edge of the field, you can see the many paths through the grasses made by creatures of all sizes, from the largest deer to the smallest mouse. Many different animals crisscross the field and flatten the grasses under their feet, searching for food. This meadow has to be mowed every year to prevent the trees from seeding and the seedlings growing back into forest. Mowing is done in spring, precisely before the eastern cottontail rabbits (Sylvilagus floridanus) give birth to their young and the protected eastern box turtle (Terrapene carolina carolina) is on the move. 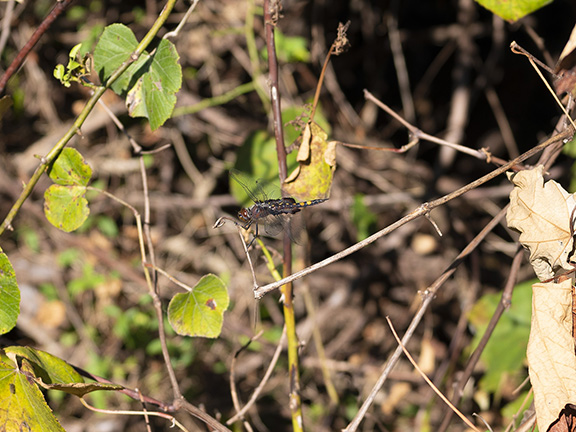 In early spring evenings, American woodcocks (Scolopax minor) return here, as they have done for hundreds of years, to perform their wonderfully spectacular courtship dance. For all their flamboyantly noisy display, they are small and unobtrusive. Nesting on the ground, they are very vulnerable to predation, so both males and females are well camouflaged, their feathers blending into the leaf litter and field grasses. Spring also brings back migratory warblers, swallows, and other birds to feed on insects and nest. 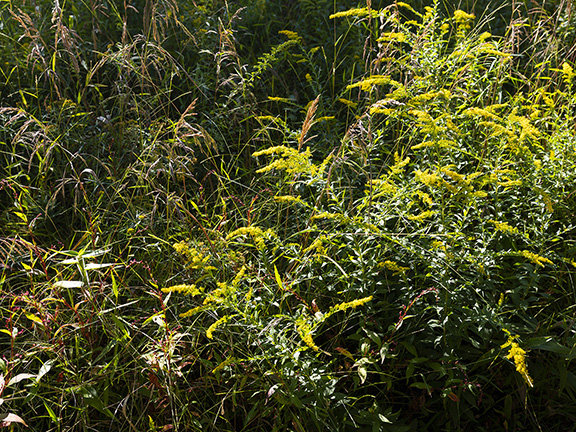 In amongst a species of goldenrod (Solidago), are the tiny, dried, red seeds of Pennsylvania smartweed (Polgonum pensylvanicum) and the wispy tan dried seed heads of sweet vernal grass (Anthoxanthum odoratum) —  ©Rory Mulligan

Some birds come to nest here, such as, the field sparrow (Spizella pusilla), eastern towhee (Pipilo erythrophthalmus), and song sparrow (Melospiza melodia). Some mammals, the eastern cottontail rabbits (Sylvilagus floridanus), woodchucks (Marmota monax), and field mice, or meadow voles (Microtus pennsylvanicus) also nest here. In summer Virginia white tail deer (Odocoileus virginianus) visit the meadow to eat leaves, plants and seeds. In winter, they generally keep to the forest, eating nuts, twigs, lichens, and fungi. Raccoons (Procyon lotor), mostly nocturnal and solitary, come down from their resting places high up in the trees or from hollows on the ground in the forest, to eat berries, field mice, bird's eggs, and birds. Harmless to humans, common garter snakes (Thamnophis sirtalis) live in the grasses, eating earthworms, insects, and other snakes.

In spring, barn swallows (Hirundo rustica) and other swallows (Hirundinidae), highly adapted aerial feeders, fly above the meadow with their beaks open to scoop up a myriad of flying insects, hatched from the plants below. Above the meadow during the day, raptors like red tailed hawks (Buteo jamaicensis), peregrine falcons (Falco peregrinus), and sharp-shinned hawks (Accipter striatus) fly over watching for the movement of small prey. Small eastern red bats (Lasiurus borealis), which roost well camouflaged in trees during the day, come out at dusk to feed on moths and other nighttime flying insects. Mostly asleep during the day, barred owls (Strix varia) and barn owls (Tyto alba) fly over at night, listening for the rustle of small mammals. 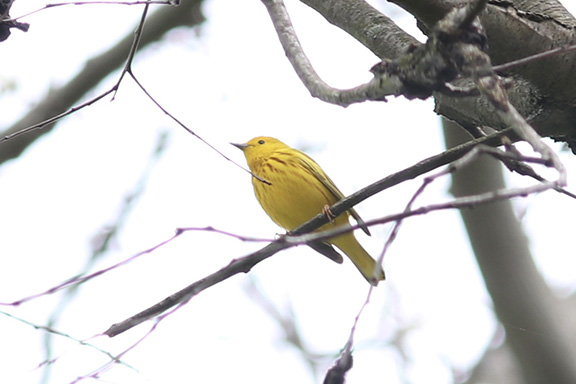 Yellow warblers (Setophaga petechia) breed across most of North America from the tundra southwards, (except for the far Southwest and the Gulf of Mexico coast). From this meadow, in fall at night, they migrate south to the Amazon region, Bolivia, and Peru – Chris Grascek 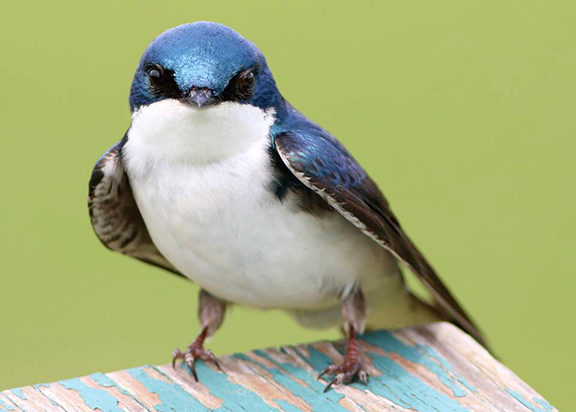 The tree swallow (Tachycineta bicolor) breeds in Canada and the US, including here in Marshlands Conservancy. It winters along southern US coasts, the Gulf Coast, Panama, parts of South America, and the West Indies – ©Christina Baal 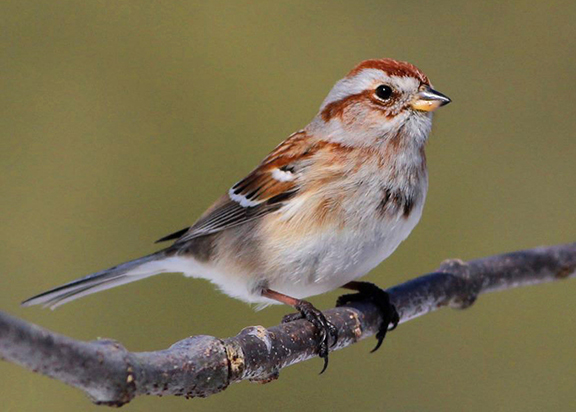 The American tree sparrow (Spizelloides arborea). Nesting on the ground, their breeding habitat is tundra, from the northern limits of the boreal forest in Alaska and northern Canada. They winter in Southern Canada, and here in this meadow and other parts of the US – ©Christina Baal

This meadow, with its abundant seeds and insects, is an essential source of food for many different species of bird in autumn. Migratory warblers (Parulidae), like the American yellow warbler (Setophaga petechia), swallows (Hirundinidae) like the tree swallow (Tachycineta bicolor), and vireos (Vireonidae), like the yellow-throated vireo (Vireo flavifrons), fly thousands of miles south to avoid the cold winter.

In this meadow these migratory birds find a place to rest and eat additional food before they make their long-distance flight. It is essential for these birds to build up their strength, so that they have the endurance needed to successfully make the long and very strenuous flight to reach their winter homes in South America and other parts of the southern hemisphere. Raptors, among many other birds, also pass through here on their fall migration south. 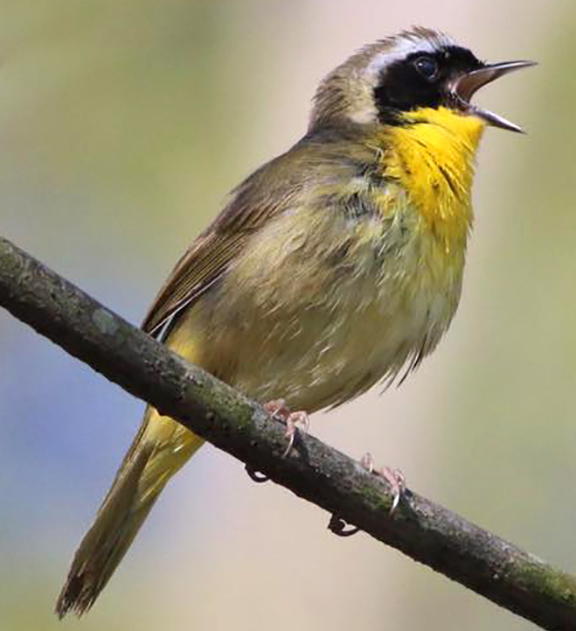 Common yellowthroat (Geothlypis trichas), a New World warbler. Breeding in North America, including here in this meadow, in winter they fly to the southern parts of Central America and the West Indies – ©Christina Baal 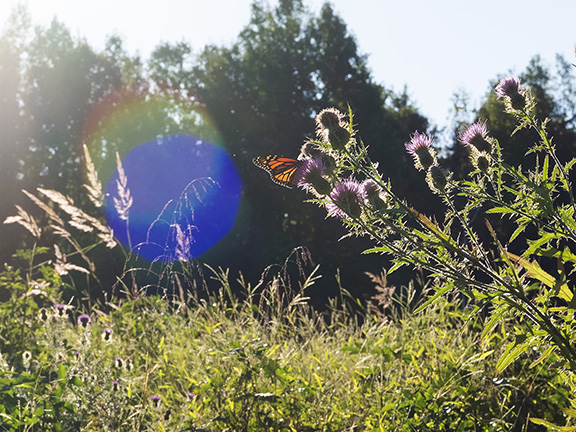 This is where many monarch butterflies (Danus plexippus) gather to prepare for their fall migration. They fly over two months and cover about three thousand miles to reach the oyamel firs (Abies religiosa) in the mountains of central Mexico, where they will hibernate for four months. While they make this journey in one generation, it takes some four generations to return. As adults, monarch butterflies feed in the meadow on the nectar of an abundant, and nutritious, variety of native wildflowers during the day. As the sun goes down they roost in the trees, wings closed and camouflaged. But, the only plant they lay their eggs on is milkweed, which is the only food their larvae can eat.

Historically, since 1681, this had been kept a meadow through annual burning, until replaced by mowing after the passage of the Clean Air Act of 1970. Archaeological evidence from this site shows that before 1681, the Siwanoy, a tribe of Eastern Woodland Indians, lived here. The Siwanoy preserved the land for hunting and agriculture, also by seasonally burning it to keep it a meadow and preventing the trees from growing back into a forest. They made fishing lines out of the outer fibrous layer of Indian hemp (Apocynum cannabinum), which still grows here today. This meadow is part of a very long living history. (See History).